With high appeal in a wide range of industrial products, copper is viewed as a very versatile material.

Copper foils are produced by very specific manufacturing processes within the foil mill which includes both hot and cold rolling.

Along with aluminum, copper is widely applied in industrial products as a highly versatile material among non-ferrous metal materials. Particularly in recent years, the demand for copper foil has been surging for electronic products including mobile phones, digital cameras, and IT devices.

Thin copper foils are either produced by electrodeposition or rolling. For electrodeposition high grade copper has to be dissolved in an acid to produce a copper electrolyte. This electrolyte solution is pumped into partially immersed, rotating drums which are electrically charged. On these drums a thin film of copper is electrodeposited. This process is also known as plating.

In an electrodeposited copper manufacturing process, the copper foil is deposited on a titanium rotating drum from a copper solution where it is connected to a DC voltage source. The cathode is attached to the drum and the anode is submerged in the copper electrolyte solution. When an electric field is applied, copper is deposited on the drum as it rotates at a very slow pace. The copper surface on the drum side is smooth while the opposite side is rough. The slower the drum speed, the thicker the copper gets and vice versa. The copper is attracted and accumulated on the cathode surface of the titanium drum. The matte and drum side of the copper foil go through different treatment cycles so that the copper could be suitable for PCB fabrication. The treatments enhance adhesion between the copper and dielectric interlayer during copper clad lamination process. Another advantage of the treatments is to act as anti-tarnish agents by slowing down oxidation of copper. 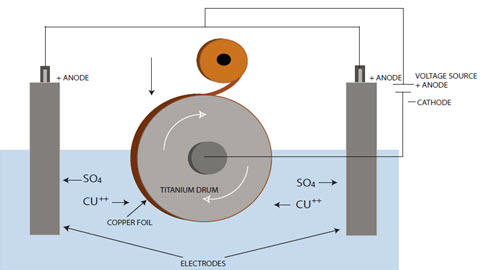 Coils of thin foils are formed and undergo subsequent chemical and mechanical treatment until they are formed into their final shape. A schematic overview of the rolling process of copper foils is given in Figure 2. A block of casted copper (approximate dimensions: 5mx1mx130mm) is heated up to 750°C. Then, it is hot rolled reversibly in several steps down to 1/10 of its original thickness. Before the first cold rolling the scales which originate from the heat treating are taken away by milling. In the cold rolling process the thickness is reduced to about 4 mm and the sheets are formed to coils. The process is controlled in such a way that the material only gets longer and does not change its width. As the sheets cannot be formed any further in this state (the material has work hardened extensively) they undergo a heat treatment and are heated to about 550°C. 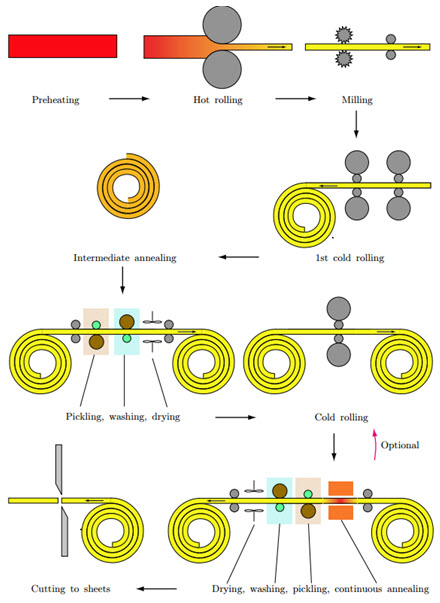 Previous post Copper kills coronavirus. Is this true? Next post The Relationship Between Copper Foil And Art Mural?